Together John and “War Dog” have been thrilling audiences with their aerial tribute to the military for 36 years. This is John and “War Dog’s” Salute to the Greatest Generation inspired by his father, a WWII veteran. John’s father’s military service influenced John’s choice to fly the T-6 Texan. The Texan is a WWII trainer celebrating its 80th year of service; known as the pilot maker because it trained more military pilots than any other airplane in history.

John’s flying career started 50 years ago, at the age of 13, and at the age of 16, he soloed 5 different types of airplanes. At this time, he has logged more than 15,000 hours flying time and has been entertaining audiences across the west, with more than 1200 air show performances at major military and civilian air shows.

His aerobatic career started with competition in 1974 in the International Aerobatic Club, where he achieved high rankings in their Gold Cup Championships. He continued to advance his career with the formation of his own aerobatic training school out of Hawthorne, California, and in 1982 he flew his first air show in Porterville, California.

Simultaneously, he was flying as a corporate pilot for Northrop/ Grumman, where he flew everything from turbo-props to jets. At Northrop/ Grumman he became a captain who flew such notables as, Vice President Dick Cheney, Defense Secretary Casper Weinberger, State Senators Diane Feinstein, and Barbara Boxer, and Brigadier General Chuck Yeager. Among the more than 50 different types of aircraft John has flown are the Goodyear Blimp “Columbia” and television’s “Airwolf” helicopter. And in “War Dog”, John flew Louis Zamperini, made known to many through the book and movie “Unbroken”. 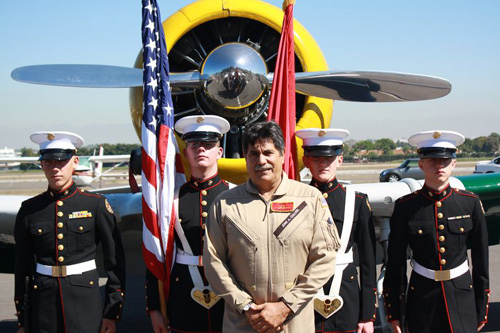 A measure of the respect John carries in the field of aerobatics is his designation as one of the air show industry’s Aerobatic Competency Examiners, entrusted with ensuring the competency of other aerobatic performers. John and “War Dog” have been featured in film and numerous national and international publications. He even performed for Vice President George H. Bush.

John has served on the board and organized airshow events, including the Torrance and Hawthorne Air Fairs, and assisted in organizing the Salinas Air Show and the Travis Air Force Air Show.  He organized flights for the 60th Anniversary of Pearl Harbor and to commemorate the Doolittle Raider Operation for the San Diego Aero Space Museum.

John is well known for his smooth, masterful control of “War Dog”. Many of the maneuvers you will see are the combat maneuvers taught to aviators during WWII. Unlike fighter aircraft, the T-6 is underpowered for its weight and although the moves appear effortless, they require a high degree of skill and planning to fly in the air show environment.

Now, enjoy John and “War Dogs” beautiful aerial ballet as they fly to the music from the movie “Pearl Harbor”, sung by Faith Hill.

John’s airplane “War Dog” is a 1944 Marine SNJ-5 Texan, built in Dallas, Texas. She was based in Orange County at Marine Corps Air Station El Toro on property known today as The Great Park. “War Dog” belonged to the VMT-2 training squadron. The letters VMT stand for “V,” heavier than air, and “MT,” for military trainer. The WD painted on “War Dog’s” tail stands for Walt Disney. Walt Disney designed Ferdinand the bull, a red bull with small wings as the El Toro base mascot. In reciprocation, the Marines painted Walt Disney’s initials, WD, on all the aircraft based at El Toro.

There is another interesting connection John and “War Dog” have to Disney. For a brief time, Disney was in the air show business. Their show took place off the stern of the Queen Mary as part of a 1940’s inspired entertainment venture, put on 3 times a day, every day, for about six months. And John and “War Dog” were one of only four acts chosen to fly in the air show.

When John acquired”War Dog “, he chose to restore her to her original paint scheme, from her El Toro days. The green stripes on her wings designate her as an instrument trainer. In 1946, after serving at El Toro, she was reassigned to serve at Marine Corp Air Station Miramar. Later, she was assigned to the Naval Training Command where she was used for carrier qualifications aboard the USS Cabot off the coast of Pensacola, Florida. In the1950’s “War Dog” was retired from the Navy and was sent to Japan to serve in the Japanese Self Defense Force. After several years of service with the Japanese, “War Dog” was retired and was due to be scrapped. Instead, she was saved along with several other T-6 Texans when they were purchased by civilians in the US. John helped with her restoration and  eventually became her sole owner.

John’s performance consists of speeds of 60 mph to over 200 mph and altitudes from the surface to 3000 ft.

The propeller is 108 inches long, and the distinctive sound you hear coming from “War Dog” is the sound of the propeller tips going supersonic. The North American T-6, Texan was designed as an advanced fighter/ trainer in 1938. WWII pilots started training on the primary trainer, the Stearman and then moved into the advanced trainer, the T-6 and eventually to fighter aircraft such as the P-51, Mustang.  The basic Texan design underwent constant modifications. It gave the best possible training in all types of tactics, from ground strafing to bombardment and aerial dogfighting. Some of the equipment typically found on the T-6 includes bomb racks, blind instrumentation, standard cameras and 30-caliber fixed and flexible guns. During the Korean War, the U.S. Air Force and Marine Corps used the plane as forward air controllers.

And during the Vietnam War the French used the T-6 for light attack. Over 15,000 examples were produced. The last model was produced in the early 1950’s.  In the early days of the Blue Angels, they used a T-6, SNJ 5 like “War Dog” as part of their tactical demonstration. She was painted yellow and called, “Beetlebomb.” During simulated dog fighting, the Blue Angels used F-6F Hellcats to shoot her down.

The military of today has bestowed a great honor on the T-6, Texan by naming its current, state of the art trainer, the Texan II.